I think that Skeezix has a new challenger for the title of stinkiest cat in the world: my sister Sophie. I am not sure why but Sophie seems to have a problem with passing very stinky gas from her booty very frequently. At first I was very confused because we eat the same foods -- from the exact same BOWL even most of the time -- but then I remembered that Sophie is always very busy eating any persons food she can get her paws on, including tortillas, rice kayks, peetas, and krusts from peetsuh. I know I am spelling some of these things wrong but who cares because they are all GROSS AND NOT THINGS THAT CATS SHOULD BE EATING AND THAT IS PROBABLY WHY SOPHIE'S BOOTY STINKS ALL OF THE TIME. It is very undignified to be stinking of smelly gas all the time. My Person has noticed it too because she sings a song to Sophie about a smelly cat. And I have to share a litter box with this cat. I mean honestly, cats.

Here is a picture of us laying together. This was not during a very stinky moment or you can believe I would not have been sitting that close to her. 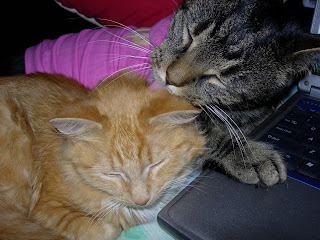 As you can see, we are right next to the computer. I am thinking about teaching Sophie to blog, but she is awful bad at typing so I think it would take hours of lessons, and if she is going to be stinking all the time, I'm not sure I can put in that kind of time.
Posted by Kismet at 9:56 PM

That is is very nice & tender photo Kismet.
It shows that not only are you a big man cat but also a new age cat.

The Meezers or Billy said...

mommy saided that Gramma Trixie was always the stinkiest kitty in the werld. She pooted efurrywhere and IN PEOPLE'S FACES. She saided that it stopped aftera few monfs. But, she also saided that kittens in general poot alot.

By the way, it is very sweet of you to groom yer little sister even though she's a little stinky.

Hello Kismet::wink:: I do beleef dat all little kittens haf pooter problums. Speedy wuz bad until he wuz over a yer old. Talk about room clearing, eye watering smell. He's bettur now, hardly stinks at all. I'z glad to see dat yoo are getting along wif Sophie, don't tell Speedy, but I like haffing sumone to cuddul wif whin it's kold outside.

Sigh...I was a VERY stinky kitten. I mean, knock your socks off, open a window, leave the room, hold your breath type of stink. I had giardia. I got some pills and it went away quickly! Maybe your mom could take some of her poo to the VET to see if anything is wrong?

Since no one wants to suffer from this embarassing social problem, maybe a change in diet plus no people food! And as Kaze suggested, be sure she doesn't have some parasite

That is very nice of you to think about teaching Sophie how to blog. even if you never actually DO it, it's a nice thought

I am soooooooooo glad I don't have to put up with stinky booties!

AMEN, BRUTHER!!! Espeshully the part abowt it not being dignifide!!!

Kiz, do yoo think if we shipt yoo a speshul toob for her booty hole that yoo cood kullekt sum of that stinky gas and ship it bak to us?? It sownds like it wood be a good ingreediunt in Mao & Rocky's Vishus Deer Repelunt!

Kizzy, are yoo waring a kyoot pink owtfit in that foto???

Rocky - NO! I am not getting NEAR THAT BOOTY!!

Skeez - that's my pink hoodie from the Gap. I got it from my very good friend Liz!

you two look so cute together! maybe you could try to keep Sophie away from eating the stink causing foods?

Dude, you gotta do something about the stinky booty. My little brother doesn't have stinky gas, but he has the stinkiest poop I have ever smelled. I don't know if it's the kitten food or what, but seriously.

Is pink your color now, Kismet? It is very becoming and only a manly man like you can really pull it off.

I'm sorry to hear about your stinky sister. Our Mom says that she's never had a stinky cat--only stinky poos that they make in the litter box and don't cover up.

Memories of Eric and Flynn said...

Neither of us has efurr had a stinky prollum wiv gas, but Eric stinks the place owt when he uses the litterbox. Mum sed she yoosed to haf a black cat cawled Mr. Pig an he wud do the quietest littull phtt in yer face, an it wuz enuff to knock yoo owt.

Persephone did that when she first got here. She was 10 months old. She doesn't much anymore. Squeak, our 2 month old kitten house guest, had the stinkiest booty EVER. She pooted ALL THE TIME but both of them stopped when they started eating my really really good kibbles from the vet that I have to eat.

Well, Persephone doesn't really poot anymore. That Squeak still does, just not nearly as much!

I think it's a kitten thing too, especially if their eat big man cat food and people food. And she was feral, so she's probably got digestive 'issues' to work out. But yeah, maybe bring a sample of poo to the vet and check it's not a sickness or bugs.

Do yoo have an mp3 of the smelly cat song? We have the BEST verzhun, it's one ware Feebey and Chrissie Hynde are singing it, and Chrissie Hynde reely kiks it up a notch. I like ware the korus goze, "Yoo smell like sumthing ded!" I still smell bad like that sumtimes, but I'm gitting better.

it must be a kitten thing becuse wow iris has some of that gas talk about a room smeling gass woo hoo. I rember when lilly lu was 10 mouths old but she never stunk like Iris who would be morfited i writeing about her stickyness

Kismet, I can relate because when I was a young kitten and I first became formerly feral, I floated a lot of air bicuits, too!

Poor stinky Sophie Cat ... did she have beans on those tortillas? Do they make KittyBeano?

Kismet: Not The Mama says that my mommy was the stinkiest kitty he ever met! Then she got re-de-wormed and it helped some! He says he is SO glad that me & Chloe didn't inherit that colon of doom stink from our mommy!
Hope her bum gets un-stinkified soon!
~ Daphne
Purrchance To Dream

Friends who read my blog!